In 2006 a Certified Pest Control Operator ("CPO") began the development of a cost effective System to resolve these issues while allowing A-Frame Ladders to be moved “quickly” through congested work areas such as offices, warehouses, production facilities, etc. The System evolved via field trialing, creating a user-friendly kit that is easily installed on an A-Frame Ladder “of any age” creating a Lift and Guidance System that raises A-Frame Ladders to a “state-of-the-art tool.” GRAPHIC 2 (System installed)

​“A-Frame” Ladders are used extensively in many work and industrial applications. Common lengths utilized are 6-foot, 7-foot, 8-foot and 10-foot. One of the Industries that uses A-Frame Ladders frequently is the Pest Control Industry. Industry technicians carry ladders throughout the workday, in some cases climbing them over “100” times per workday. Issues in Pest Control are like to those found in other Industries and during individual ladder use at home. The ladder carrier's shoulder under a ladder step often provides “lift” when moving the A-Frame Ladder. Further, the shoulder lift is accompanied by reaching through the ladder to “guide” it with a hand using a support member on the ladder’s opposite side. GRAPHIC 1 (traditional lift and guidance issues). The blunt edges of the underside of the ladder’s steps and opposite side support members press into the ladder carrier's shoulder and the fingers (knuckles) of their hand. Caused by ladder use, discomfort in both shoulder and hand areas, of the user, escalates to ongoing discomfort and soreness long after the workday is over. 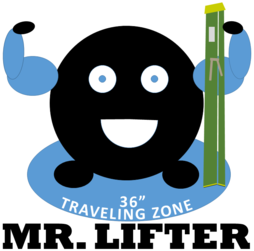